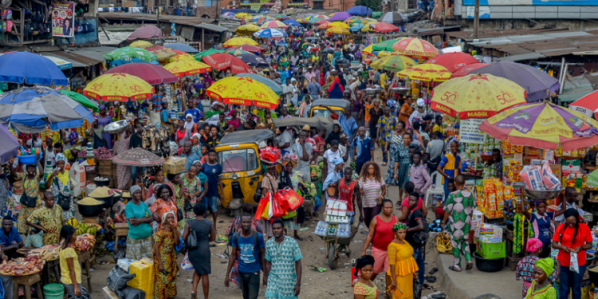 The rising cost of energy around the world has translated to a significant uptrend being witnessed in most economies as prices of goods and services have reached unprecedented levels.

The International Monetary Fund has also projected that the present inflationary pressure will continue until 2023, leading to further concerns over a consequent global economic recession. In the same vein, the IMF increased the inflation projection for advanced economies to 5.7% and 8.7% for emerging market and developing economies.

Reacting to the surging inflation rate, monetary regulators of several countries have also raised their interest rates to curb the rising cost of goods and services. However, this is yet to yield any positives as inflation rate continues to remain stubbornly on the high.

Nairametrics compiles a list of African countries and how they are faring in terms of inflation rate, based on their recent inflation numbers.

Zimbabwes inflation rate surged to 191% in the month of June 2022 from 132% recorded in the previous month, further eroding the purchasing power of the citizens.

Since the start of the Russia-Ukraine conflict, Zimbabwes inflation rate shot up from 66% to more than 130% in May. In two months, it increased again to the verge of hitting 200%.

Ghanas inflation rate for the month of June 2022 accelerated to 29.8%, up from 27.6% recorded in the previous month and the highest in 19 years. This implies that the month-on-month inflation between May and June 2022 was 3%

Similarly, food inflation for the month of June 2022 was 30.7 per cent compared to 30.1 per cent in May 2022. Non-food inflation stood at 29.1% from 25.7% recorded in May 2022. The rise in the inflation rate was attributed to increase in bus fares and other transportation costs.

Nigerias inflation rate surged to a 65-month high of 18.6% in June 2022 from 17.71% recorded in the previous month, representing the fifth consecutive monthly rise in the rate of inflation. The last time the inflation rate in Nigeria touched the 18.6% ceiling was January 2017, when it stood at 18.72%.

The uptick in the inflation rate is largely due to the surge in energy prices, which affected transportation costs across the country, and by extension rise in food prices.

The annual inflation rate in Rwanda accelerated to 16.1% in June of 2022 from 14.8% in the previous month. It was the highest inflation rate since March of 2009, with prices of food & non-alcoholic beverages surging 26.1%, the most since February 2020, amid soaring commodities.

The monthly inflation rate for the month of June 2022 in Egypt slowed slightly to 13.2%, representing its first decrease in seven months. Despite the decline, inflation rate remains on the high compared to the previous year.

Accordingly, Egypts annual inflation rose to 14.7% in June, up from 5.3% in the same month last year. The rising rate of inflation informed the decision of the Central Bank of Egypt to raise rates in March 2022 for the first time since 2017, and then raise rates again in May 2022.

Annual inflation rate in Botswana increased to 12.7% in June of 2022, the highest since January of 2009, and compared to 11.9% in May, pushed up by elevated global energy prices.

The biggest upward pressure came from prices of transport, food and non-alcoholic beverages, housing and utilities, and miscellaneous goods and services. Compared to the previous month, consumer prices increased 1.3%, after jumping 2.6% in May 2022,

Kenya‘s inflation rate surged to a 58-month high in June 2022 on soaring prices of food items, breaching the government’s upper limit target for the first time since August 2017 (7.5%). The inflation rate accelerated by 0.8% points compared to 7.1% recorded in the previous month.

According to the Managing Director of the Kenya National Bureau of Statistics (KNBS), Macdonald Obudho, the rise in inflation was mainly due to increase in prices of commodities under food and non-alcoholic beverages, furnishings, household equipment and routine household maintenance, transport, and housing, water, electricity, gas, and other fuels.

South Africa‘s inflation rate accelerated to 6.5% in May 2022 compared to 5.9% recorded in the previous month. The rate surged past the central bank’s target range for the first time in more than 5 years.

This is also the highest reading since January 2017 when the rate was 6.6%. According to Statistics South Africa, Transport and food and non-alcoholic beverages accounted for just over half of the annual rate, with sharp price increases recorded in both categories. Fuel continues to be a major contributor: to the rising inflation rate. 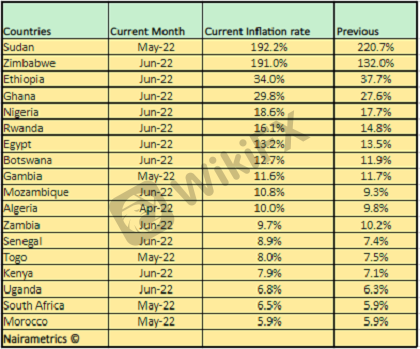 It is worth noting that the current inflationary pressure experienced by African economies, with Nigeria inclusive is a global phenomenon and is not peculiar to some countries. For example, Britains inflation rate hit 9.1% in May, a new 40-year high and up slightly on the previous month. Similarly, the inflation rate of USA rose to 9.1% in June, the highest in almost 41 years.

Also, according to forecasts from the International Monetary Fund (IMF), Argentina stands the risk of hitting a 90% inflation rate by the end of the year following rising prices of goods and services after the economy minister, Martin Guzman exited his position earlier this month.